I’ve been a fangirl before that was a word. I’ve been a fangirl for almost twenty years, long before the internet made fans accessible to each other, before there was a community to find online the way there is now. Before Tumblr and Instagram and Twitter. I say that and it makes me feel old.

I stood in long lines outside Filenes to get concert tickets when they went on sale. I wore a blue wig just to feel like I stood out in a crowd of thousands. I wrote letters that I never sent. I pasted posters from Bop magazine on my bedroom door. I scoffed at anyone who called me obsessed, dismissed people who refused to understand. At night I dreamed up scenarios where real people turned into characters in my mind.

I was a fangirl during the days of dial-up internet and AOL chats. I made e-mail newsletters in crazy fonts and colors before there were e-mail spam issues. 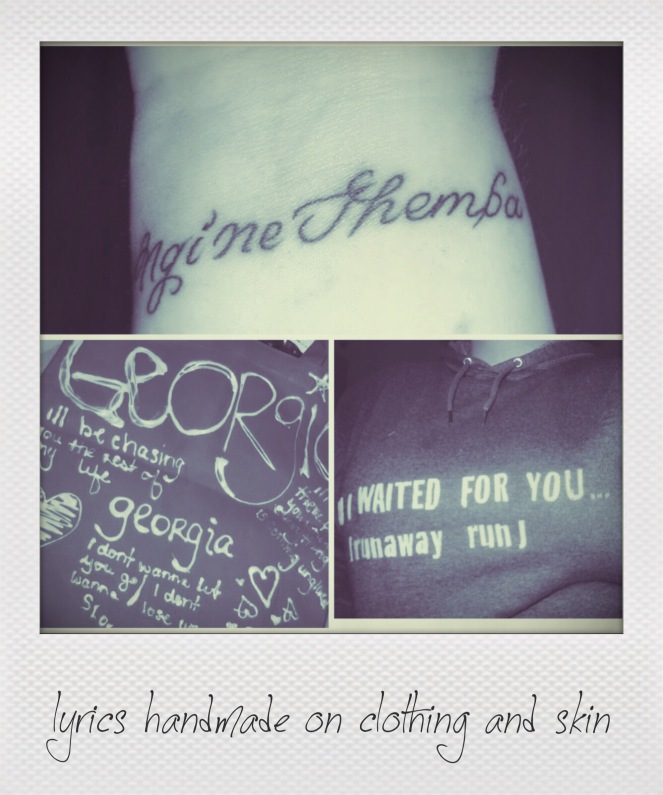 I wrote fanfiction for friends and strangers, emailed chapters of stories as I completed them. I met some of my best friends that way. We didn’t have website where we could upload images we created and make own our merchandise, and there weren’t fan sites that sold pretty things. No Etsy or Redbubble. We used Geocities to make fan pages with terrible flashy graphics instead.

The first form of “social media” and online expression that I immersed myself in was OpenDiary. After that there was Xanga, Myspace and Livejournal. All were online worlds where I could connect with people I didn’t know who loved the same things I loved. In these worlds I could open my heart up in an anonymous way, like writing in a journal that others would see. I could know that someone out there read what I read and felt that, too.

Being a fangirl in the early 2000’s meant you didn’t have a cell phone to text people, and you had to rely on long-distance phone calls to hear someones’ voice. We took pictures with regular cameras, selfies with digital cameras (before “selfie” was a word). Before digital cameras we had to wait for them to be developed and hope they came out okay. We recorded television appearances on VHS because we didn’t know if we could ever see those recordings, hear the silly stupid words said again.

Now there is a lot of community online. You can find community for any sort of thing you can fangirling over). You can immerse yourself and meet new people and relate. And I’m glad about this. I know lots of people scoff at everyone being too connected and addicted to their phones, but they discount the experiences of these people. They discount the connections made long distance with friends you’d never have met another way. I have a few very dear friends that I still talk to, and I met them because we connected over the Internet. We dreamed about Hanson. We wanted to write like Francesca Lia Block. When I was in high school I still felt disconnected. No one else had liked Francesca Lia Block, no one knew who she was. Everyone made fun of me for loving three blonde boys who, at one point, could have been mistaken for girls (who cares about their gender, anyway?). I’m glad we can get together and post in a group on Facebook, use hashtags and share fanart in ways that used to be more difficult.

A couple years ago I read the book Fangirl  by Rainbow Rowell and it was the first time I read a book with a main character so much like me. I couldn’t believe it. All those years fangirling over books and music and falling in love with songs and boys – both fictional and real – and writing endless stories and finally I had found a character that I could relate to so much.

So being a fangirl has changed a lot over the years. In a way, I think it’s a lot cooler now, but maybe it just feels more cool to me. There’s more access to community, shops that make candles based on character and story scents, artists that sell fanart in the form of prints and clothing among other things, subscription boxes to fill your fandom needs and so much more.